by Stephanie Vega
in Featured
A A
0 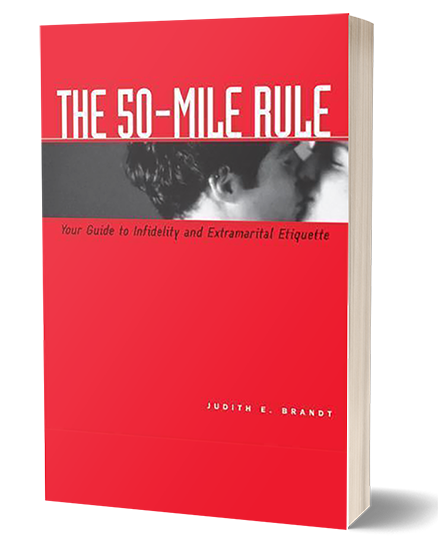 There are scores of books on etiquette in most any bookstore. You will find social etiquette, wedding etiquette, and even etiquette for kids. But what about the etiquette of having an affair?

2022 marks the 20th anniversary of the release of The 50 Mile Rule, Judith E. Brandt’s pioneering guide to having successful, fulfilling, and toe-curling flings. At times cautionary, this cheating instruction manual offers salient advice on arranging, managing, and finally cutting loose lovers once the thrill is gone. Though it could use a little updating in the age of smartphones, hook-up apps, and social media, the advice contained in it is still very relevant for scandalous women who want to eat their cake and have it, too.

“The reality is if nearly half of all (committed) people end up having an affair, shouldn’t someone be out there telling them how to do it right?” asks Brandt.

“Having an affair isn’t necessarily wrong,” she continues. “What IS wrong is going about it in an… emotional or drunken daze, with no thought to what happens if you’re discovered.”

“Affairs can rekindle feelings and emotions in you that you may have believed long buried. For some people, they’re the only things that make a long-term relationship tolerable.”

In 2013, Bloomberg Businessweek reported on the most recent data from the National Opinion Research Center’s General Social Survey, which shows women had more affairs in the preceding two decades than in all previous surveyed years combined. The percentage of men who admitted to infidelity “held constant at 21 percent,” while “the percentage of women having affairs rose 40 percent to 14.7 percent in 2010.”

More eye-opening is the number of people who have considered an affair or would if the circumstances were right. LAIntelligence reveals 68 percent of women admit they’d cheat if it were guaranteed they’d never get caught.

“Women can afford the potential consequences of an affair, with higher incomes and more job prospects,” she said. “They have more economic independence…”

Another way of putting it is previously; women would be left penniless, with no education and no means to support themselves, if caught cheating. Add the stigma of being branded a whore, and you’ll see why it was seldom in their best interests to get a little on the side.

This isn’t the only study that suggests the infidelity gap is closing. That same year, 33 percent of men and 19 percent of women admitted to being unfaithful when they were polled for The Normal Bar, an extensive survey of the romantic relationships of more than 100,000 people. The survey pointed to some of the most common reasons women stray, a major one being sexual boredom.

Shea Courtney, a relationships writer for Elle, explains that while there is no one reason why women cheat, it does seem like the current circumstances of our gender are a factor for some. Namely that for women who feel suffocated by the impossible expectations of modern womanhood (where “having it all” can feel like not just an opportunity but a mandate), infidelity has emerged as an unlikely but potentially effective release—cheaper than a luxury spa, easier than ever thanks to the Internet and maybe not even at odds with happily ever after. Some relationship experts contend affairs can strengthen relationships.

Many contend humans have evolved to be monogamous but recent research from the University of Texas challenges that long-held notion. David Buss, a professor of evolutionary psychology at the University of Texas and his partner, Cari Goetz, an assistant professor of psychology at California State University, San Bernardino, and their team introduced a theory they call the “mate-switching hypothesis” in which they argue women have evolved to keep looking for new sex partners.

Early humans faced much shorter lifespans, and the death of a woman’s partner was practically just around every corner. “Ancestral women lacking a backup mate would have suffered a lapse in protection and resources,” Buss explains, adding that it was prudent for them to always be on the lookout for a new partner. “Affairs serve as a form of mate insurance, keeping a backup mate should a switch become warranted in the future. A regular mate may cheat, defect, die, or decline in mate value.”

The idea is that women might be genetically hard-wired to cheat may sound bogus to some, but several studies published in the last few years show women are quite prone to having affairs despite the conventional wisdom they aren’t. According to a report in The New York Times, one of those studies showed a significant link between vasopressin and oxytocin receptor genes and promiscuity in women. Meanwhile, those genes seemed to have no effect on men’s sexual behavior.

One ill-timed or mismanaged dalliance can ruin a relationship if it goes wrong. (Don’t believe me? Watch what happens to Diane Lane in ‘Unfaithful.’) But when done right, argues Brandt, an affair is “the spice of life.” When the 50 Mile Rule was published, Brandt was a marketing executive at a well-known magazine who wrote under a pseudonym to maintain privacy. Her book seeks to help those inclined to stray to play it safe, or at least safer. Her 20 rules for affairs were gathered from private confessions and her own experience.

The most important rule of her cheating advice: you should live and work at least 50 miles apart. She says, “people are so lazy. They go for proximity and don’t think about what happens when you dump this person then have to see them at work every day.” Or, for that matter, the grocery store, the nightclub, the PTA meetings, the neighborhood parties, etc. 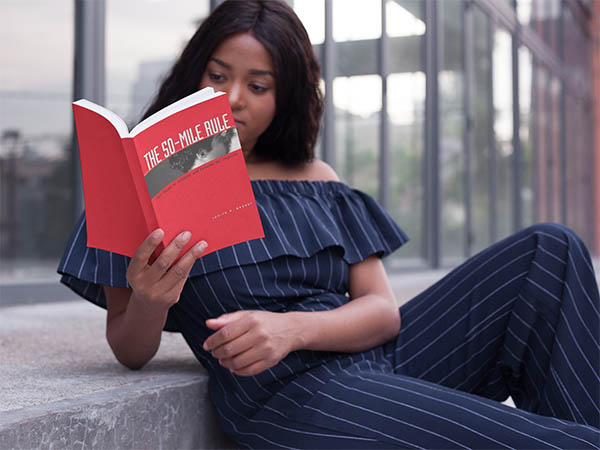 Brandt’s other rules include:

• Don’t get caught. Phone bills, gift receipts, an extra key on the keyring, a sudden interest in fitness, better grooming, or new positions in the bedroom–all are red flags. If Brandt’s book were updated today, additional tell-tale signs would be text messages, social media exchanges, internet search history, etc. A few too many ‘likes’ on your posts by your fuck toy can raise suspicions. You might consider not accepting follow requests from your lovers.

• Deny everything if you’re caught. “Admitting to an affair,” says Brandt, “almost always leads to misery. The spouse doesn’t want to believe it, and a confession only leads to hurt, rage, and months–sometimes even a lifetime–of distrust.”

• Both of you should practice safe sex to avoid STDs and other consequences. Condoms AND the pill or IUD or contraception of choice. “Whatever you do, don’t make a baby!”

• Don’t take your flings personally. Don’t fool yourself into believing this will lead to something permanent. The book asserts that only 5% of affairs lead to marriage, and they end badly too. Keep your focus on what you started the affair for – the sex. When that fizzles, move on.

• Separate your relationships. Keep the world your affairs exist in completely separate from your married world. “The only affair more foolish than the office romance is one with someone in the social circle you share with your spouse,” Brandt says. “So why risk so much for someone you hardly know?” But many people do, and it’s because of chemicals.

The excitement of a new relationship is potent. “Documented chemical changes take place in the brain during the beginning stages of a relationship,” says Janis Spring, Yale University clinical psychologist and author of After the Affair, one of the bestselling books on infidelity. “These changes are very powerful.”

A Guide and a Warning

Brandt describes her book as both a warning and a guide. “I’m trying to give people some perspective. People tend to look at these relationships as some titanic new love when every relationship has a cycle. At first, feelings are extremely intense, but they won’t always be. I’m trying to help people make sense of that so they can put affairs in perspective and act appropriately.”

For all the condemnation serial adulterers get, most have learned to recognize their flings are only about the hot sex and the “new relationship” buzz that comes with them. Under no illusions this person will be the next great love of their lives, they quickly move on when the high becomes a low – and you should, too. “Having one lover for life is a quaint and ideal notion, but not terribly realistic,” Brandt says, noting that love today parallels career changes. “People used to be more loyal. They used to stay with one company for 30 or 40 years, then get the gold watch. Now people have ten different jobs during a 40-year career and many meaningful relationships. Because there’s more opportunity, people trade up, move on and get canned.”

“The fact is,” Brandt says, “this is a high-stakes game. Some people are cut out for it, and others are not. Fidelity is easier. I wouldn’t say it’s always better.”

Vacation Sex: Sometimes You Want To Go Where Nobody Knows Your Name

With political activists as parents, Stephanie learned gender politics at an early age and embraced stiletto feminism in high school. As a marketing professional, she’s written for a variety of publications. She founded Scandalouswoman to be a voice for the sex-positive alpha female.

Vacation Sex: Sometimes You Want To Go Where Nobody Knows Your Name

Beyond the Vibe: 8 Sex Toys You Need Right Fucking Now!