by Krissy Eliot
in Interviews
0

In her newly released single, “Princess Boy,” Aline sings about how sexy it is for men to be sexually submissive. And in her upcoming song, “Super Freak,” (produced by the grammy award winning Scott Jacoby) Aline wants to call attention to the sexiness of unique and quirky people and encourage her fans to explore different facets of attraction.

Recently, this rising star was kind enough to take an hour to stare at my face through an iPhone screen and let me probe her mind on all things sex and music. And as her velvety European accent lured me toward a higher number on the Kinsey Scale, Aline spoke to me about her goals, her sexual preferences, and how feminism played a part in drawing her to S&M.

How long did you live there before moving to Paris?

I did all my schooling in Belgium, and when I stopped school, I went to Paris. I wasn’t in Paris for that long — about a year. And then I went to New York. 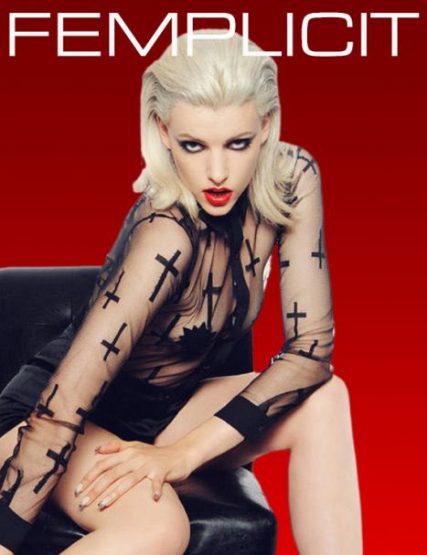 Right. And it’s not all about beating people and wearing latex and stuff. Sometimes you can just be wearing normal clothes and talking to the guy. Very quietly, even, you can just say: “You have to do this!” Or you can humiliate him, or dress him up like a woman.

Is it something you enjoy doing in your personal life?

Eventually I got invited to parties where they pay you to be there and hang out in costume. Guys would pay me to lick my feet. Eventually people just started asking me: “Can you come to this party and the guys will just give you money to lick your feet?” And then eventually I started doing private sessions.

You said being tall draws men to you because it makes you more intimidating. How tall are you?

I’m 5′ 11.” And in Paris I had black hair and I guess I appeared very intimidating and impressive. But even now with my blonde hair, men seek me out for domination. They can tell just by the way I stand that I’m dominant.

Why did you move to NY?

I like to say that the reason I moved to New York is just New York. I actually moved to L.A. first for a few months, but I didn’t really find what I wanted. So I moved to NY and I stayed here. It feels like the center of the universe.

I’ve always been very concerned about women and their position in the world. I’ve been questioning it since I was kid — mostly because my mom was always like: “Get a job, never get fooled by guys!” She was protective. She was a strong woman who raised three kids by herself. I respect the strong mother image. So I guess the domination thing is a part of that.

What do you mean?

Well, the guys who are into domination are usually alpha males. A lot of them have good jobs. They’re bosses, CEOs. A lot of the time, what they want is to feel like they’re shit. Like someone else is telling them what to do. They want to feel blank for an hour and have someone tell them what to think and what to do. It’s a power thing.

Do you still do that here in NY?

I still go to parties where I get paid, but I don’t do private sessions anymore. I’m done with that.

Americans say that all the time! But I’m still trying to figure that out.

So you don’t notice a difference?

There’s a difference in the laws. You can’t drink beer on the street, the legal ages to do a lot of things are raised, you can’t walk around naked outside. They’re more loose about that in Europe. Prostitution is illegal here, and there it’s legal. Other than that, people here are still doing sexy things. Americans have that vision of Europe being more sexual. But I think there’s something about America that is just as sexual… but it’s more secret. People talk less about it.

In your song, “Princess Boy,” you sing about being into androgynous men. Are your lyrics direct expressions of your personal life?

When I write, most of the time it’s something personal. “Princess Boy” just came to me one day. And I thought: “Hey, gay people might like this because of the drag queen thing.” And now I’m discovering that fetishists will also like it because of the cross-dressing thing.

When I write, I think about how I can target that kind of market and the people that will like it. And of course, I write because I want to… and it excites me. Sometimes when I write, though, I worry that [my ideas] sound a bit crazy. And people may think it’s too much.

I can see the whole package of the song. How the music video is going to look, how I’m going to perform it live. For “Princess Boy,” the first thing I saw in my head was the music video. And then I thought of the story and the performance, and then afterward I started to write the song.

Yeah. I perform in fetish clubs. When I perform “Break Your Heart” on stage, I come in with a leash and a paddle and beat a guy on stage. And with “Princess Boy,” I just remove all his clothes and put him in stockings and heels and a dress.

There’s a theme running through both “Break Your Heart” and “Princess Boy.” It seems your lyrics focus on a woman being in control of a male partner, emotionally and physically. Are you encouraging the idea that men should be sexually submissive?

It’s tricky. I think it’s all about preferences. That’s something that I’m into. But most of the time, I just have freakin’ normal sex with guys. But I also love to take control. I think it’s fun. I have different sides. But that’s totally a message of mine. It’s okay to explore sexuality. A lot of guys are scared because they think people won’t take them seriously anymore because of their fetishes.

I was talking to a designer earlier today, and she was telling me about how a guy came to her store and he had a spandex fetish. She specializes in spandex clothing design. He put a one-piece spandex outfit on, and he was ashamed to walk back home wearing it. He was a straight guy. For him, the spandex was something so sexual that he felt weird about wearing it in public. A lot of guys who are into that stuff have normal lives or are very powerful. It doesn’t mean you’re submissive, and it doesn’t mean you’re not a man. Actually, being submissive can be hard. It can be something you do to prove to yourself how strong you are because you have to allow someone to command you. If you’re into pain, you have to learn your limit. It’s a strong statement to be submissive.

You’re trained as an opera singer, and you enjoy classical influences like Schubert, Verdi and Debussy. Yet your single “Break Your Heart” is pop and electronica. Where do you think that comes from?

When I started music, I was into pop and rock anyway, and I was playing in rock bands at 14. And then classical music and opera training came later. And then I started to perform in operas. I was still doing rock and pop the whole time. It didn’t come out of nowhere.

Your website states that your “mission is to give a voice to the oddballs out in the world.” What types of people would you consider to be oddballs?

All the people that feel as if there’s something special about them, but they’re not sure if it’s okay to just be who they are.

Anything you want to do, you should do, even if it’s weird, because people will appreciate it and there are probably a lot of people out there that are the same as you are.

Did you ever have trouble expressing yourself?

I was an awkward teenager. I was scared of men. I didn’t want to go on dates. It took me awhile to be okay with them. Until very recently I was awkward socially. I wouldn’t talk around people I didn’t know. And still now, even though I’m experienced, I feel weird. But I’m using it. I found my niche of people who are weird and have weird ideas. I attract the right people to make things happen the way I want. Now I don’t feel like I’m so awkward.

Do you have any upcoming albums or songs that we should look forward to?

I’m just finishing up the video for Princess Boy. Tomorrow I’m shooting another song called “Super Freak.” I want to release it by the end of this year or the start of next year. It’s a ballad. It’s very different from what I’ve been doing. It’ll feature people who have something special. They could be very little, very tall, very curvy. Or [they could] have no arm, or a big scar, or a lot of tattoos. Visually different.

Sex and the Single Cuckoldress